Looking for a product use our SEARCH below, if you can’t find what you are looking for GET IN TOUCH with us.

Just like any knife sharpening business in Chicago or elsewhere around the US, Northwestern Cutlery started with an Italian man riding around on his cart with his grindstone, sharpening the knives of all the locals. I’m sure if you haven’t seen it for yourself; you’ve heard your parents, or your grandparents tell you stories about the man with the knife cart. Knife Sharpening is a craft and process that remains timeless and essential to many chefs and food professionals around the world. Approximately seven men from the same town in Northern Italy migrated to the United States and settled into Chicago. These gentlemen collectively owned the market share for knife sharpening as a service, back in the late 1960’s and early 1970’s.

Two “power house” companies and rival’s, Northern and Western Grinding, worked independently as competitors for years. Henry, of Western Grinding, was highly regarded among knife sharpeners in Chicago. Henry was friends with Dennis, who owned Western Grinding. Before Dennis died, Henry promised him, he would look after his son Chuck and so Henry and Chuck join forces in 1972 and created Northwestern Cutlery.

Henry began his career working for another family in the knife sharpening business around the time of the Korean War. Back then, a grindstone was mounted onto the back of a truck, which would stop in front of a packing house, meat market or butcher shop. The employees would run out to have their knives sharpened and then get right back to work. Henry took a break from knife sharpening to join the military while the war was in progress. Upon his release, he returned to the knife business. Henry was the man with the relationships, like most Italians, he wanted to “build-a-route” and work for himself. He began his own business working out of his basement. The grindstone setup he used in his basement is still in operation within our store today. Henry and Chuck collectively developed a successful business over the years.

Down the road, Chuck decided to branch out and start his own business, taking employees and clients with him. Fortunately, Henry was the man with the experience and relationships so Northwestern Cutlery moved on.

Henry knew he needed to hire new employees since he lost most of his team to Chuck. Little did Henry know that he would be hiring his soon to be son-in-law Marty. He started working at Northwestern Cutlery in the 1980s. He heard about the job opportunity from Henry’s daughter Karen. Marty and Karen at the time worked at a camera shop together before he jumped into the knife world. He started working on Saturday’s only, but he quickly became a full-time employee working open to close every day. Marty ended up marrying Henry’s daughter Karen and then officially became Henry’s right hand man in the company.

Marty’s initial position entailed: Receiving a stack-of-cards daily, consisting of an address, a plethora of knives to swap out and the dollar amount that needed to be collected from each customer. Marty, sort of thrown into the deep end at first, ended up being responsible for servicing clients such as the Washburn Trade School on 26th and Kedzie. Back then, some of Northwestern Cutlery’s clients included; Kendall College (which is still a customer today), meat and fish companies, coupled with restaurants and more.

In the late 90’s, when the web was in its infancy, they developed a great on-line business. Because they had very few, if any competitors with a web presence back then, they built a successful on-line presence.

Henry passed away and Marty took over the business in its entirety. In 2012, Marty’s niece (Henry’s granddaughter), Jessica showed interest in working for the company. Marty didn’t think she would last more than a few months working in this type of company and environment. She was only 18 when she started working there but this bright, young woman came in and became a “mover-and-shaker.” When she first started Jessica would catch herself looking at-the-clock and suddenly a “bucket-of-knives” would be thrown at her to sharpen. Once she realized there was more to the Northwestern Cutlery than sharpening knives she had her own new ideas to take the company to an entire new level. Not only did she come-up with new themes and remodeling, she also set-up booths at events and trade shows, implementing progressive web and digital marketing solutions and more.

If you are looking to work with a passionate and experienced knife sharpening business in Chicago, you’ve come to the right place. With long-term, dedicated employees, we are your source for chef knives, cookware, and more. The team encourages you to browse the web site and /or come-into the shop to see how their products and services benefit you. 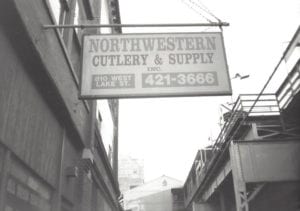 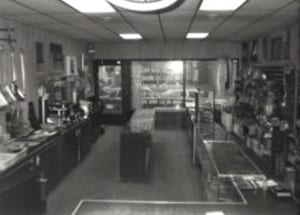 No need to stress over the perfect gift. Give the gift that allows your special someone to add a new favorite gadget to their kitchen. Our gift cards are fit for a variety of occasions such as: birthdays, weddings, graduations.

I arrived shortly before closing and they still sharpened my knives to perfection. My only complaint about this place … I have never left without buying some new kitchen gadget that I’ve never seen before … but it’s worth every penny.